We the undersigned support full day caretakers in all our schools just like all other Metro Winnipeg School Divisions.  Presently there are 10 elementary schools that have not had a full day caretaker since 1994!  If the St James-Assiniboia School Division believes in their mission statement of “safe and caring schools” they would eliminate the unjust practice of part time caretakers, which directly affects the most vulnerable children in our division, kindergarten and day care!  We would like to see the new school board eliminate this practice.

In 1994 twinning of caretakers was implemented at all schools to save money.  Twinning of caretakers meant a full time caretaker was now working between two schools, one in the morning and one in the afternoon!  In an emergency situation the caretaker would have to run between schools!  This process went on for 10 years until 2004/05 when administrators complained about this practice.  The new policy was based on the square footage of the school, thus those schools over 46,400 square feet received a full time day caretaker and those under (Assiniboine, Athlone, Bannatyne, Buchanan, Brooklands, Crestview, Heritage, Phoenix Robert Browning, and Voyageur) received par time caretakers. Eight of these schools were without a caretaker for 1.5 hours while two schools Phoenix and Brooklands were without a caretaker for 3 and 3.5 hours respectively!  In 2011 more money was added to the budget to bring Phoenix and Brooklands up to 1.5 hours but 10 schools still remain without a full time caretaker!  Five elementary schools (Lakewood, Linwood, Sansome, Stevenson, and Strathmillan) have a full day caretaker based on the square footage (above 46,400 sq. Ft.)  Thus this produces, in my opinion, an inequitable two tier system of health and safety! Parents at all schools pay the same taxes, don’t they all deserve the same level of service?  In my opinion, we have a social justice issue right in our own back yard, which needs to be cleaned up!

The St James Division did a survey of the 10 affected schools (Assiniboine, Athlone, Bannatyne, Buchanan, Brooklands, Crestview, Heritage, Phoenix Robert Browning, and Voyageur) during the month of March 2010.  They found that there were a total of 59 incidents that required caretaker assistance.  Administration confirmed that 12/59 incidents happened when no caretaker was available to help out (please see attached documents below).  Thus the March 2010 Survey showed that incidents of bodily fluids, other liquids and fecal matter, getting onto the floors and no caretaker present to assist in cleaning it up, happens 12/59 or 20% of the time.  The School Board felt that since no one was complaining about these situations and principals had not asked for additional cleaning  staff that the public must be satisfied with this level of service at these schools!  The reality appears to be that the public knows nothing about this situation!  This was confirmed by Trustee Hume’s Petition for Full Day Caretakers which was brought to the public during the 2014 election.  Two hundred forty-two members of the public signed the petition out of two hundred fifty-five for a signing rate of 95%.  Almost all of the 255 members of the public who were informed about this issue stated, “I thought you already had full time day caretakers”  Thus this raises the question, “Did the School Board ever inform the public that they planned to cut back on custodial services when they first started this austerity measure way back in 1994?”  Presently in my opinion it is no longer a matter of money since it would only cost about  $180,000.00 over a $100,000,000.00 budget which equals about 1/5 of one percent, chump change.  This money could easily be found through reallocation of funds under the present budget without costing the tax payer a cent.  In my opinion we have a health, safety and equity issue (5 elementary schools get a full time caretaker based on square footage of the building and 10 don’t which creates a two tiered system of health and safety for students within the same school division!), that needs to be rectified for the benefit of the students and staff at the affected schools. All other Winnipeg School Divisions have full day caretakers!  Please read through the following 3 documents below to confirm the existence of the March 2010 survey. 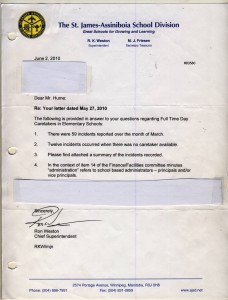 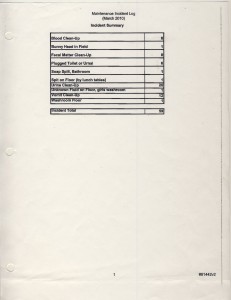 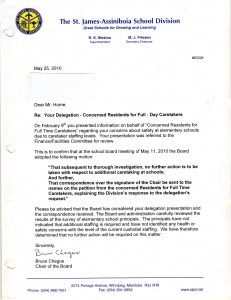 Board’s response to concerned residents in May 25, 2010

The main reason for not wanting to change the status quo today, appears to be the same reason that was given by the Board back in May 2010.  No employees /unions, principals within the school division are complaining thus, there must be no problem.  Trustee Hume feels that it is human nature within a top-down management system not to complain about a controversial issue.  Employees fear retribution whether real or perceived and will not fill out complaint forms where they have to sign their name.  Thus he is not surprised by the lack of complaints. This point, however, is really irrelevant since Trustee Hume and 242 members of the informed public are complaining and feel that this situation is not the right way to treat children.  Based on their most common comment during election, “I thought you already had a full time day caretakers,” it appears that the public in general knows nothing about this issue!

Trustee Hume’s personal experience of working 33 years at the elementary level in the division, the divisions own data form the March 2010 Survey, where the Division found that these incidents happen 20%, and principal comments from this same survey where they mention the problems but basically say they will do it as other duties assigned, suggests in my opinion that the problem exists.  The informed public sees that a full time day caretaker at all schools is an essential service which needs to be restored.  All other Winnipeg school divisions have a full day caretakers!

Concerned Residents for full day caretakers involved only about 8-10 members of the public in March 2010.  In light of a much larger sampling of the public (255) in Oct 2014, where 242/255 members of the public signed for a 95% level of support, the new school board thus needs to reconsider the issue of using part-time day caretakers at 10 of their elementary schools!  The Oct 2014 Petition for Full Day Caretakers was presented to the school board on Dec. 9th.  There was a motion to refer this Petition to the Finance Facilities Committee Meeting on Tues. Jan. 6th, 2015.  The public is invited to come to the next public school board meeting on Tuesday Jan. 13th for the Boards response to this petition.  Members of the public will be allowed to ask questions about this issue on Jan. 13th 2015.

Unfortunately there wasn’t enough Board support to get it passed.  The result of the final recorded vote was 7 – 2

A big thank you to the members of the public who attended the meeting.

See the School Divisions Response to all Petition Signers below: